The Gorilla on My Bookshelf 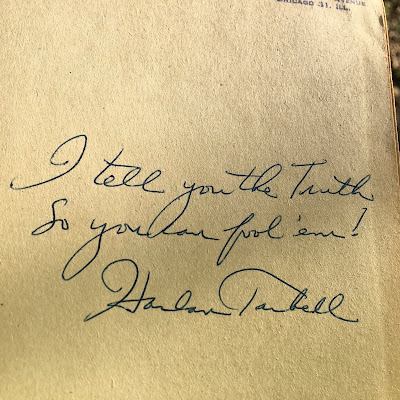 I don’t remember ever seeing this. But, it's in plain sight.

It’s on the first page of one of my FAVORITE MAGIC BOOKS… Volume #3 of THE TARBELL COURSE IN MAGIC by Harlan Tarbell.
It’s there, but I noticed it for the first time… two days ago.
When I was a young magician, I wanted to “know” everything possible about magic. I was told that The Tarbell Course in Magic was “the way to go”. It was an 8 volume compilation of a magic correspondence course that Dr. Harlan Tarbell has written, illustrated, collected, and produced. The course is PACKED with lots and lots and lots of magic. The first edition was printed in… 1927. It was very good. It was also very expensive! So I set my “eyes on the prize”. Get those books.
I collected my pennies and purchased the entire set somewhere around 1979 or 1980 or 1981 (my set was used and printed in 1948) from a gruff (and I found hilarious Magic Equipment Dealer) named Paul Diamond. Each volume is filled with great illustrations and even better explanations of magical effects. I LOVED it instantly. When I got the books home from Florida State Magician’s Convention, I dove in to my studies.
What’s interesting to me now, is that I NEVER noticed that I had an autographed copy by the author – Harlan Tarbell.
I was so engaged with the tricks, I never even saw the signature. It’s possible that I saw it and because it wasn’t important to me, I didn’t remember it. This makes me think that it’s similar to the "Invisible Gorilla" phenomena. An awareness test from Daniel Simons and Christopher Chabris about focus and inattentiveness. The concept is covered in their book THE INVISIBLE GORRILLA (which is a very good book as well). Here’s a link to the experiment.
https://www.youtube.com/watch?v=vJG698U2Mvo
The idea behind this experiment is that when keenly focused, we ignore (sometimes) very obvious stuff.
This seems to be the case with my Harlan Tarbell autographed book. I was LOCKED with lazer-like-focus to learn magic. The idea that the author had signed the book made no difference to me at all… consequently… I didn’t even realize he had.
I recently finished the first season of a national kids science show for PBS. The show is a combination of magic tricks and science ideas. I’m super proud of it. It’s called STEVE TRASH SCIENCE. I co-produced it in partnership with Alabama Public Television. During the 11 months of writing, shooting, producing, and creating it, I got in the habit of waking up VERY early (3:00-3:30am) each morning to get stuff done before I had to do my shows for that day. As I said, I’ve finished work on season one of the show, but I’ve continued to get up early, all the same. But now I’ve been getting up and relaxing on my front porch. I read some books for fun and watch the sun rise. It’s been a real pleasure.
A couple of days ago, I grabbed Volume #3 and sat down on the front porch for a read. The book flopped open. There was the autograph. Wait… what? Harlan Tarbell has signed my book printed in 1948? Yes? Cool. Basically… it was the Invisible Gorilla… in book form.
Our minds are wonderful things, but they are focus-able, fallible, and maybe even a little feeble. For me, this is a reminder to always attempt to remain humble about what I believe and think to be true, cause I miss a lot.
Oh yes… and… guess what? I have an autographed copy of Tarbell. Cool right?
#ibm #magician #invisibleorilla #tarbellcourse #magicbooks #selectiveattention #stevetrash #lifelonglearner #porchreader #harlantarbell #magic #tricks #internationalbrotherhoodofmagicians #convention #floridamagicians #pauldiamond #danielsimons #chrischabris #inattentionalblindness #louistannen #keithhalbasch